Homemade slime is an all time favorite around here. Whether you call it slime, gak, or putty this homemade glow in the dark slime recipe is a fun activity for kids that will keep them occupied for hours! 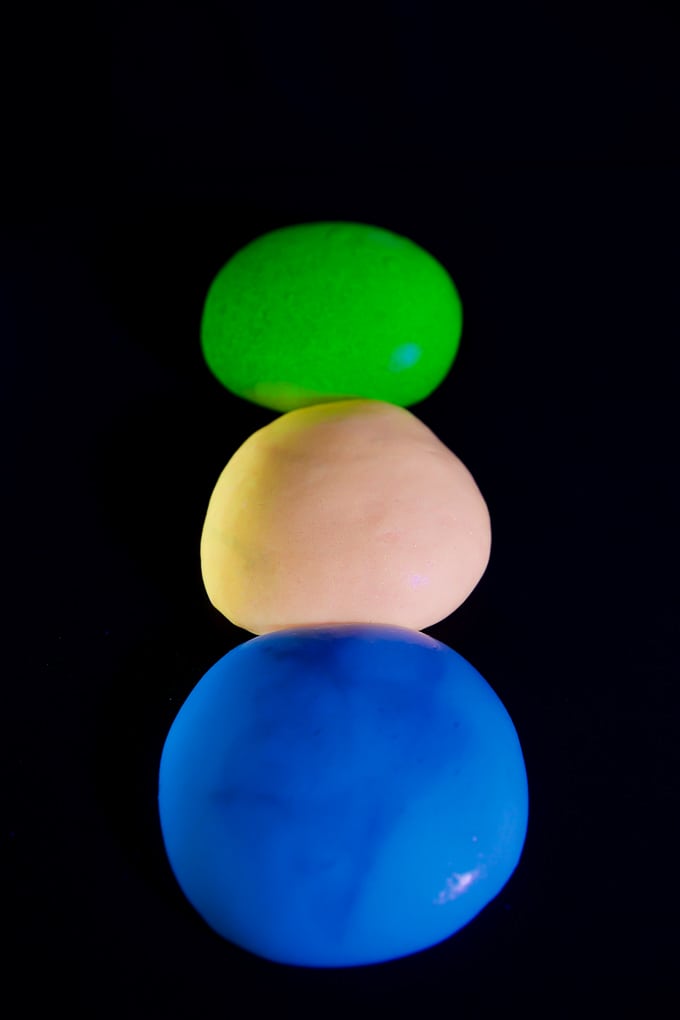 Glow in the Dark Slime

Glow in the dark crafts are fun for kids and great for late night parties. One of our favorite slime recipes is this Glow in the Dark Slime! The slime is activated by light then glows in the dark. We have been making this slime for years and have used it as a party favor many times. If you’re hosting a glow in the dark party be sure to check out these amazing GLOW IN THE DARK IDEAS!

There are many ways to make slime and I’m going to share a couple different recipes you can try with kids. Slime recipes can be made with or without borax. If you prefer a no-borax slime recipe, contact lens solution is a great alternative. To make this recipe you will need glue, borax or contact lens solution, glow in the dark paint, and neon green food coloring. The original slime recipe is below and the updated no-borax recipe is further down the post.
This post contains affiliate links 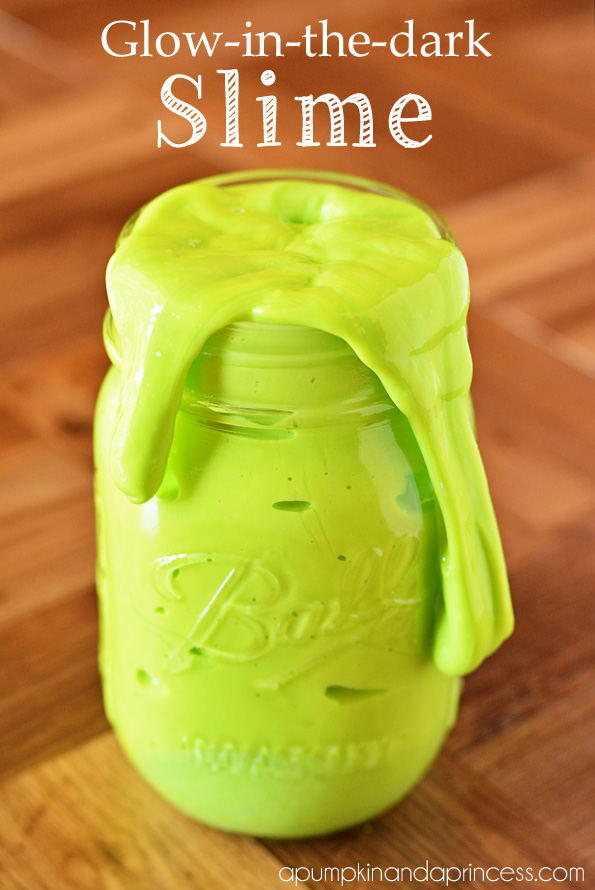 How to make glow in the dark slime

The special ingredient that makes the glue turn into slime is the borax. Play around with the amount to get the perfect consistency, if you prefer a runny slime use less borax. Also, when you first began mixing the glue and borax water the slime will be VERY runny and a weird texture, don’t freak out! The more you play with it the better the consistency will turn out.

How to make glow in the dark slime without borax 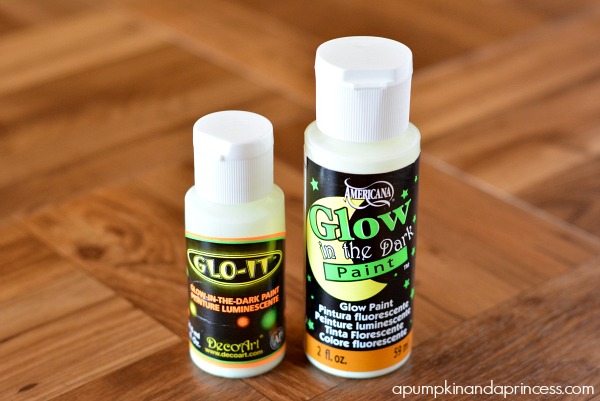 In case you’re wondering we tried the original recipe with two different glow in the dark paints. We preferred the one on the right from Americana but the Glo-It from DecoArt also worked well with smaller batches.

We also tried this recipe with glitter glue which my daughter loved! You can see the glitter specks in the glow in the dark picture below.

Glow in the dark slime tips 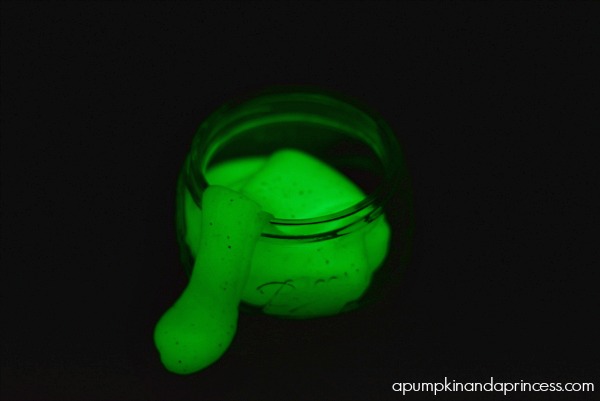 My kids love that they can shape it with their hands but if left alone it looks like spilled slime. Speaking of slime do you guys remember Nickelodeon’s slime? I may have been born in the 80s but I’m a 90s kid all the way! I always wanted to go on the Nickelodeon shows and get slimed, it always looked like fun! :)

Glow in the dark Party 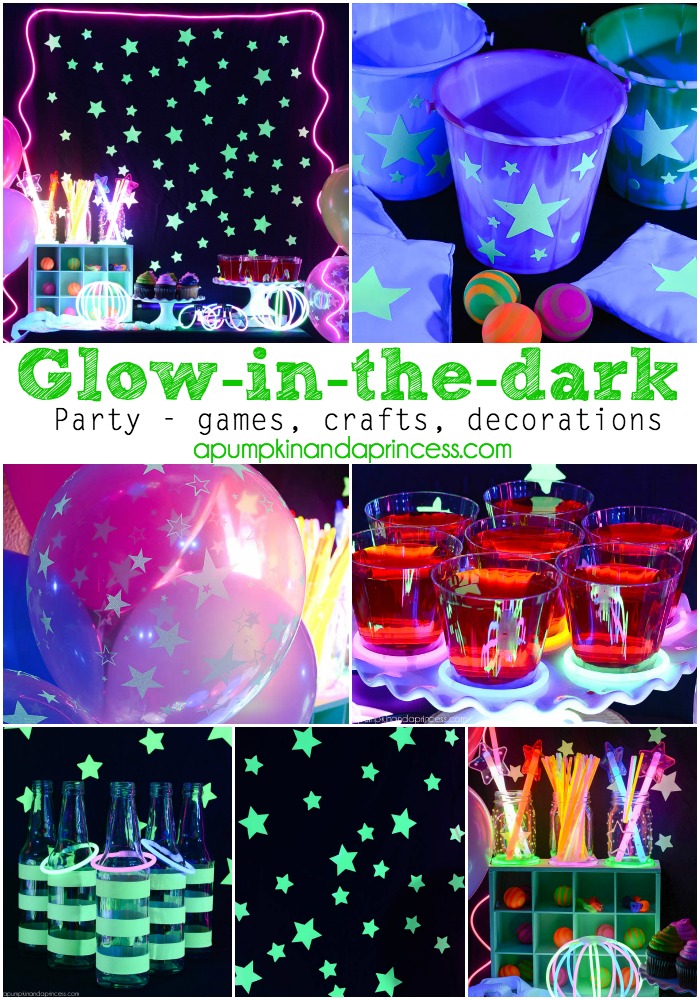 Glow in the dark mason jars 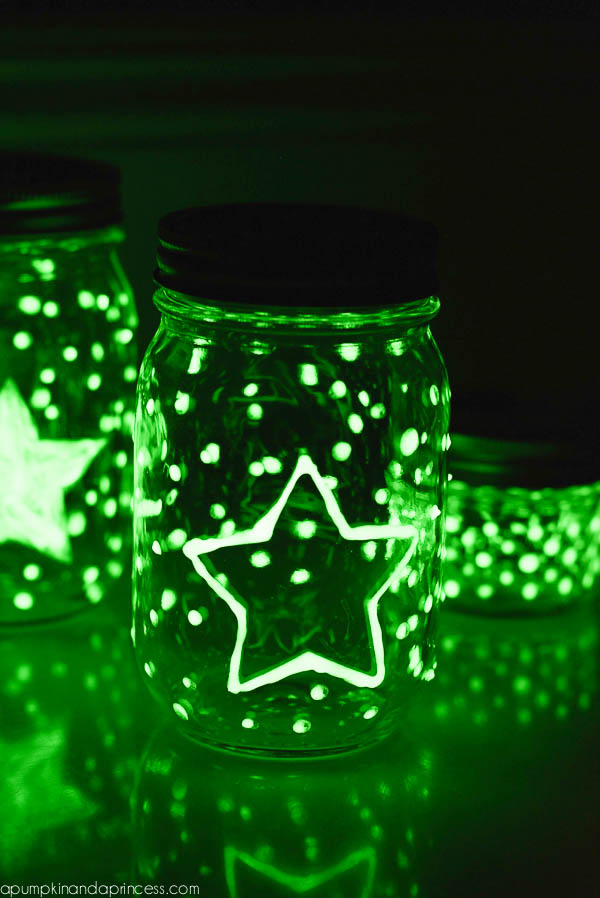 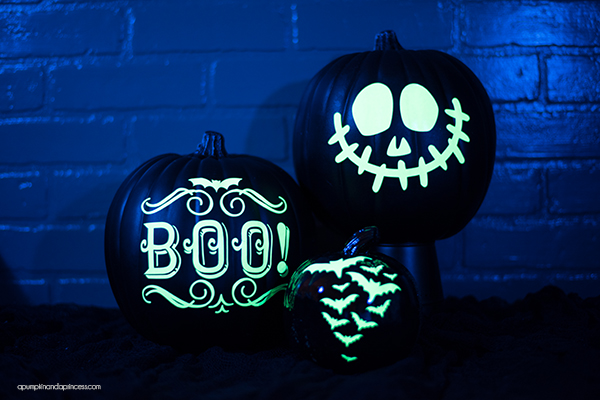 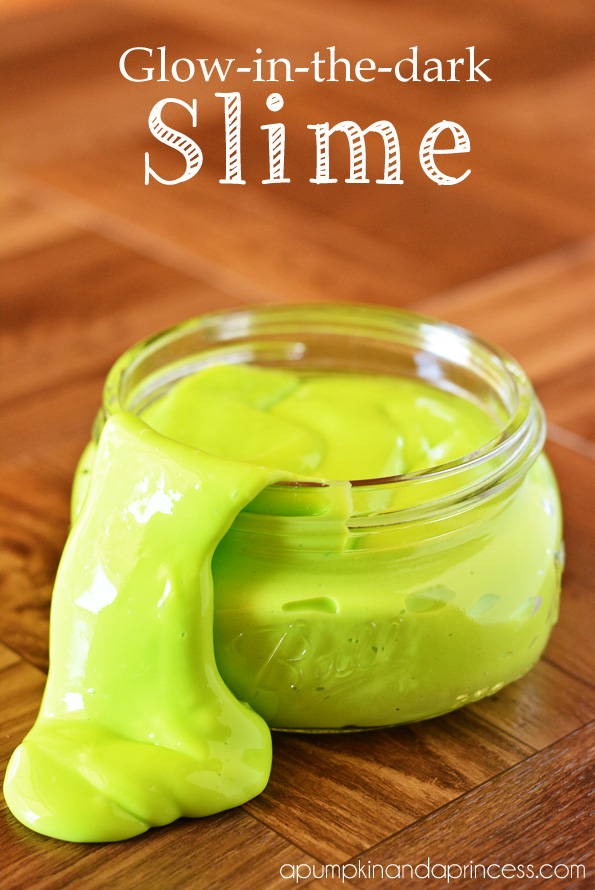 Thanks so much for this slime project. I am especially happy to see you tell us the company for the food colour with as well as the name of the companies to get the Glow in The Dark PAINT from. Thanks so much. Maureen.

I am making this at my son’s Halloween party. I am trying to figure out how much of each ingredient I need if I want to give about a half cup of slime to each of the 24 children. Thanks!

I just made this for my toddlers monsters inc party. Found on Pinterest. Love it! Gave my toddlers some to sample. They were enthralled. Today is Friday, party is Sunday. Giving it as favors in small airtight containers. Any idea how long it will keep like this? It’ll still be good when Kurds take it home, right? Thanks for sharing!

I too am wondering how long this will keep? I am hosting a halloween party, on a wednesday, but my schedule is quite busy with all the other prep. I suppose I could made a big batch and just wait to split it up until the day before.

Ami, as long as it’s in a closed container you won’t have a problem. It can last for months if the container is sealed. I hope you have a fun Halloween party!

Made this today for a ninja turtle party- sooo easy thanks!!!

Made this up yesterday with my grandkids, ages 7 & 3. So easy to do, each got a turn at mixing up their own batch! They absolutely love it and played with it non-stop for almost 3 hours just sitting around the kitchen table! Will certainly make more.

Is this something that can be molded with hands and it retain it’s shaped or is this one that will stick to hands and be runny? I’m only wondering because it think I want to make it if it so something less runny and something he can take out again and again.

Great recipe, but I’m not impressed with Martha Stewart’s glow in the dark paint. Or I’m not using enough. Next time I will use the Americana brand and order it online since Michael’s was out.

This is so great! My daughter is going to do this for her science project for school. Thank you

How fun!!! I know my son will love this! Sharing it on our website today!!

Very nice, but, in Italy, how I can use in the place of Borax?

thanks for this idea

Also, just thought of another question. Could I add the glow in the dark paint in after the slime has already been made?

Do you have to use Neon Food Coloring?

Wow this is such a great idea. I’ll defiantly have to put some of this in my Halloween feel box. I just know that everyone at the party will love it too.